Many of the skilled workers engaged in the Connecting People Intervention Study have their own bank of local knowledge.  When asked where information about the local opportunities for social participation is captured, we heard of physical files, computer drives, or more commonly described by one worker who simply pointed to her head!  It is true, agency teams hold a dearth of knowledge in each worker, some of whom are “experts” in various domains of the community such as sport groups or religious associations.  But collectively across the team, greater knowledge of the community (local or community of interest) can reduce workload over time.

Therefore, we have found one useful training activity for agency teams has been the identification and mapping of community assets.  The session aims to look at how relationships with the wider community can be developed for both workers and individuals.

Typically the session begins as a group discussion (or small groups by local teams) to define “community asset” and provide examples based on current case loads.  We ask workers to each write five community assets on small slips of paper. 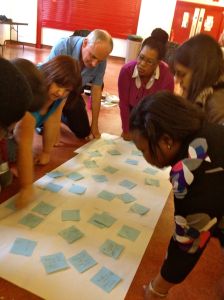 We then ask workers to share their five assets with the other team members, and in the centre of the room work together to somehow group the assets.  For example, in one training session workers grouped assets into the following domains:

In another training session, workers identified all the services and assets within specific geographical areas. 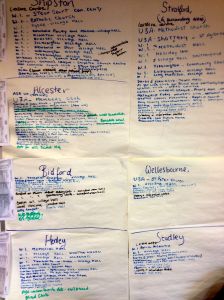 Once the arrangement has been established, workers are encouraged to add assets from their own knowledge of the local community.  By the end of the session a small map of the community assets has been created.  Some questions to consider of the group: What might be the connections between these assets?  Where do the workers and individuals fall within this map?  What assets might service users bring that workers are unaware of, how can they become involved in the mapping process?

Lastly we encourage the team to develop Action Plans through discussion of how community mapping can move forward, be regularly used and updated, and become a shared resource within the agency.  Feedback from workers has been positive and we can already see that agencies are taking this on as an opportunity to create resource directories and as a dynamic way of sharing local knowledge.

One of the most recent training exercises that we have designed involved looking at new ways of overcoming barriers.  Quite a lot of the other exercises that we have tailored to this section of the model have focussed on the power of the group for inspiration – for example presenting a difficult case to the other members of the training group and asking them for positive suggestions on how to overcome these barriers.

For this exercise, though, we wanted workers to find their own solutions to the barriers that they were facing.  In small groups of around 3 or 4, we asked them to identify the biggest barriers that they themselves faced that would stop them from implementing the Connecting People Intervention as they would otherwise want to.  We also asked them what they thought the biggest barrier facing the individuals that they worked with was, which would stop them from moving on.

These barriers tended to be quite overarching concepts – for example ‘lack of funds’ for the worker or ‘lack of motivation’ for the individual.   They were seen as large, somewhat insurmountable barriers due to their abstract nature and therefore difficulty in dealing with.

The workers were then asked to take each of the barriers identified, and on large pieces of paper split them into their component parts to form a spider diagram.  The barriers continued to be broken down until they reached a collection of singular, discrete problems.  Once workers had got to this stage, they were asked to think creatively about a solution – imagining that apart from this one issue, there were no other barriers faced. 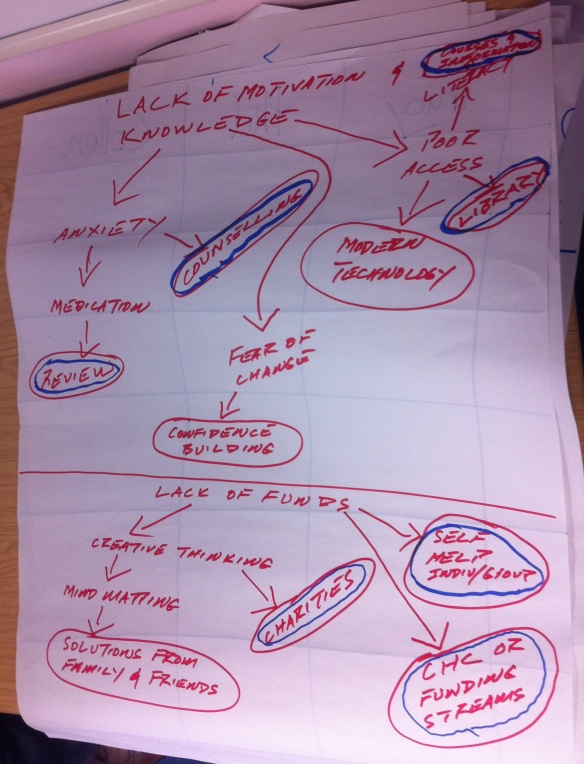 The first time that we conducted this exercise we had expected the solutions that they came up with to be quite fantastical given this freedom, however we were pleasantly surprised that the workers tended to give very practical solutions that were perhaps just slightly outside of something that they would have done in every day practice.

When workers had come up with a solution, we asked them to circle it so we could see where it was on the page, and then carry on thinking up solutions for each of the discrete problems.

Once this had been accomplished, the groups were instructed to look again at each of the solutions, now in the cold light of reality and with the other barriers that were faced back in play.  They then circled the solutions that could still be achieved in a different colour.

Most were surprised to see that in fact, the majority of their solutions were realistic in the present, and could be achieved.  We created a quick chart to show the major barrier and the small component solutions that could be implemented to at least partially overcome it.  This was incorporated as part of the training material given to the group after the session, to enable them to work more effectively with the intervention.  Workers feedback suggested that this approach was a useful one, and that they would not only be repeating this process on other barriers, but also would refer back to the list for practical solutions should they face one of those that they had examined during that training session.

We are in the midst of training 15 agencies in the Connecting People Intervention for the Pilot Study.  The agencies are diverse, ranging from small third sector social enterprises to large NHS Mental Health Trusts.  Yet across all sites there has been a unifying message that the model accurately reflects current practice and equally illuminates both the areas where workers excel in enhancing social participation with individuals and the current challenges that are faced by health and social care workers.

We have found that each agency team is unique in their approach to working within the model and therefore our training sessions have been greatly adapted to fit the strengths and needs of each agency.  Similarly to the development of the model itself, the training sessions have been co-produced between the research and agency teams in an effort to maximise the model’s utility for individual workers.

Over the coming weeks we will be sharing some of the training activities we found particularly beneficial.  We hope that by sharing our experience the agencies involved in the pilot study will be better equipped to use the activities when training new staff and take the intervention forward throughout the duration of the study (and beyond!).

Martin, Hannah, and Meredith recently attended a Research Impact workshop, hosted by the Social Services Research Group (SSRG) to address the gap between research, policy and practice that exists in health and social care research.  The SSRG is a non-profit organisation which aims to provide a network and forum for research with members coming from a range of professional groups and organisations committed to advancing knowledge of social and health care services.

The Research Impact workshop focussed not only on the translation of research but also on the localisation of results into relevant contexts.  The day offered an opportunity to discuss some of the barriers to dissemination and implementation of research results such as language, length, and complexity of research reports.  Diversity in social care services was mentioned several times throughout the day as the field is challenged by many different stakeholders and a varied extent to which practice can be evidence-informed.  Solutions were discussed to engage practitioners with new media, research training opportunities for qualifying practitioners, and developing a formal network to connect with independent sector organisations.

Martin joined Chris Rainey (West Sussex CC and SSRG) and Deborah Rutter (SCIE) on a panel at the start of the day, and we all enjoyed the opportunity to network with other professionals in health and social care.   As a team we discussed ways that we can reach a wider audience with the results from the Connecting People Intervention Study.  Some of those include brochures to share our results from the systematic reviews, videos and packages of training materials, and of course continuing to promote the blog for frequent study updates.  We welcome your feedback on useful tools to disseminate our research findings, please feel free to leave comments below!

Hello! My name is Meredith and I’m the newest member of the Connecting People Study.

My background is in child and health psychology and I have recently worked on research projects related to family interventions for youth offenders and the impact of risk perceptions on health behaviour. I also serve on the Board of Directors for an African development organisation. These experiences have led to my strong interest in supporting strategic efforts that empower individuals within community-based health and social care.

The first part of my role on the Connecting People Study is to systematically review the current literature on interventions that promote the social participation and well-being of adults with a learning disability or mental health problem. This is a great way for us to learn what factors make interventions effective (or not!) and how we might best develop the Connecting People Intervention to support the needs of social care workers and service users.

I’ll be sharing interesting findings from my review on the blog so please check back for future posts. Also, your feedback on our progress is always welcome and I look forward to hearing your questions and comments about our findings!